Here are the comparative Household Ratings of ABS-CBN, TV5, and GMA-7 programs from January 4-6, 2013 based on the overnight ratings of Kantar Media/TNS among Total Philippines Urban & Rural households:

Erik Santos plays Roque in this heart-wrenching story of a man’s undying love to Merlinda (Charee Pineda) even after she marries his brother Raul (Arron Villaflor), raises a family, and dies of childbirth. This “Maalaala Mo Kaya” year-opener-special was shot in Tanay, under the direction of Mae Cruz. This is not the first time that Direk Mae and Erik have worked together, and from the raving positive feedback, we will not be surprised if it won’t be the last. 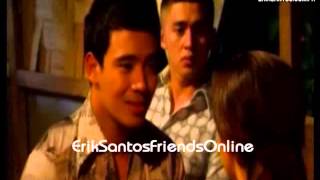 Erik Santos, the Prince of Pop, is popularly known & recognized for his singing talent. His music is often used on teleseryes & movies but rarely do we see him act.

Today, on the 2013 opening salvo of MMK, the man behind the theme songs steps forward & gives acting spotlight another try. A story about family, love & sacrifice characterized the roles of Arron Villaflor, Charee Pineda & Erik Santos. Erik as “Roque” & Arron as “Raul” are brothers who fell in love with one girl Merlinda, played by Charee.

These two ventures of Erik on acting were directed by the top-grossing director Mae Cruz, who has all praises on Erik’s attitude & talent! She said that Erik has a great potential on acting and he’s not only a good singer but a good actor as well.

Are we excited to see Erik Santos as an actor? Be MMK’s guest tonight! Ready the couch, popcorn, & tissue on the side! Happy watching!

Erik’s invitation to watch his MMK:

MANILA, Philippines – Singer Erik Santos will star in the first episode of the ABS-CBN drama anthology “Maalaala Mo Kaya” for 2013.

This Saturday (January 5), Santos will play the role of Roque, a reserved type of man who seeks help from his younger brother Raul (Aaron Villaflor) to win the heart of his childhood crush Merlinda (Charee Pineda).

The episode serves as Santos’ second acting project on “MMK”.

In the story, Cris Villanueva and Dominic Ochoa will play the roles of the old Roque and Raul, respectively.

“MMK” airs every Saturday after “Wansapanataym” on ABS-CBN.