Prince of Pop Erik Santos temporarily veered away from pop ballad in his recent Roadshow guesting as he promoted the latest single of his album, “Champion Reborn.”

“Sino Ba Ako Sa’yo” is a catchy rock­-and-­ballad song composed by Yeng Constantino for Erik’s newest project under Star Music, his record label for the past 13 years.

According to Erik, he is proud about his latest musical offering because it is his first official venture into other genre like RnB and electronic dance music.

In his previous visit to the Wish 107.5 Bus, he shared that it is “high time for [his] fans to listen to his new music.”
END_OF_DOCUMENT_TOKEN_TO_BE_REPLACED

Prince of Pop Erik Santos covers Whitney Houston’s 1988 hit, “Where Do Broken Hearts Go,” while on board Wish 107.5 Bus. His soulful rendition will surely melt the hearts of the listeners as they, at the back of their minds, ask the same question without so much of waiting for an answer.

Two of this generation’s highly recognized and established singers come as one in a dream concert that promises to deliver the goods.

Erik Santos and Angeline-Quinto, their shining stars intertwined by virtue of their stellar record as familiar voices to local movie and teleserye theme songs, are joining hands as featured acts in an anticipated major concert on Aug. 15 at the Smart Araneta Coliseum.

The show, produced by Cornerstone Concerts and simply billed Erik Santos and Angeline Quinto at the Araneta Coliseum is expected to provide a kind of stage spectacle rarely seen by concertgoers. It is also far from being just a simple set but promises to be grand for its “talked about concept” – three concerts, two musical royalties, one night.

Both Erik and Angeline are crowned as this generation’s “King and Queen of Theme Songs,” respectively, with Erik having sung 37 themes to his high-valued name while Angeline scoring 35 so far in her steadily moving music career for teleseryes and films. The numbers are mind-boggling, the effect to music fans, encompassing.
END_OF_DOCUMENT_TOKEN_TO_BE_REPLACED

Erik Santos pulled all stops to give fans all their money’s worth during his 10-year anniversary concert “InTENse” held at the PICC Plenary Hall on Saturday.

Starting with the huge opening number featuring El Gamma Penumbra, a group popular for its inventive shadow-based performances, Santos treated fans to surprise after surprise, making obvious his efforts to keep them satisfied.

He assured fans early on that it would be night they won’t forget, and he more than delivered on that promise.
END_OF_DOCUMENT_TOKEN_TO_BE_REPLACED

END_OF_DOCUMENT_TOKEN_TO_BE_REPLACED

IN THE LOCAL music business where everybody can seem to just come up to the microphone and sing, Erik Santos knows very well that fame is fleeting and fans can be fickle.

That is why when asked what was his greatest accomplishment is as he marks his 10th anniversary in the business, the 31-year old vocalist from Malabon was quick to say: “I think lasting for 10 years in the business is my biggest achievement.

“I saw some singers who started at about the same time as I did, but who are unfortunately not as active in the industry now as before. That makes me more aware that I have to be thankful that I got to this point of my career,” he added in Filipino.

To celebrate the milestone, Mr. Santos will have a one-night concert at the PICC Plenary Hall in Pasay City on Saturday.
END_OF_DOCUMENT_TOKEN_TO_BE_REPLACED 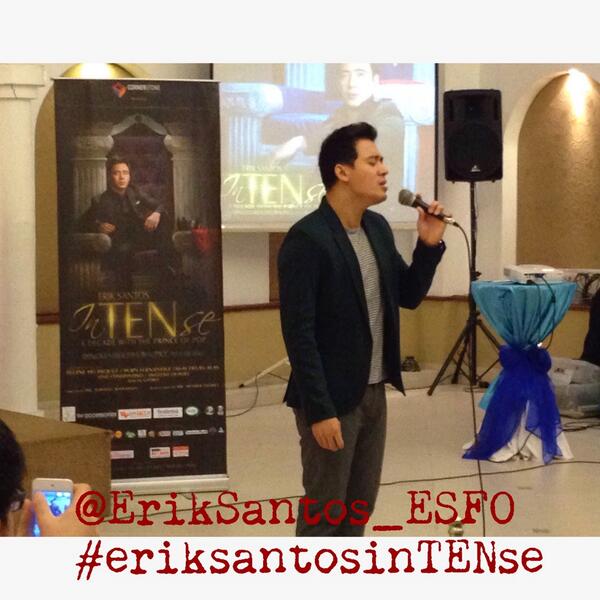